Fishing opener in Minnesota!  Finally.  Headed out to my home water on the St. Louis River.  I had one species in mind, Esox lucius, aka Northern Pike.  And I found a few willing to bite.  Main river water temperature was @ 54-55 degrees.  Found some shallow bays with temps between 56-57.  Shallow being less then 2', yes that's two feet!  This was part of the equation.  The other part was wood and bulrushes nearby.  Find that and there will be some bigger pike hanging around.  Getting them to bite was a different matter.

If a pike wanted the fly, there was no hesitation.  I had a lot of follows, including a couple of fish probably in the low 40's.  Quite a few missed strikes.  Most of the bigger fish just finished up spawn as they looked a little rough.  The biggest one in the boat was 38", very good fight.  Four fish were in the low 30's and serveral more in the upper 20's.  Had two bonus catches, 18" smallmouth!  I ran into a few short stretches that had all smallmouth.  Once I caught one or one missed the fly, I moved on.  No pike in the same area as the smallmouth, plus smallmouth bass are not in season.  2 more weeks and game one!  I also turned a huge musky, had it one for a couple of seconds.  At first I thought I had a snag, realized it was a fish, set the hook, musky rolled over, then unbuttoned!  Musky season is another month away. 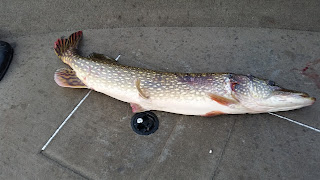 One thing that really stood out to me today was how shallow the fish were.  1-2 feet.  The St. Louis River has a distinct color to it.  Water clarity is maybe 2 feet for most of the river.  It doesn't help that the river bottom blends in with the water color. It's hard to fish two feet of water and not see the bottom.  Most lakes you would see the fish, not on the river. 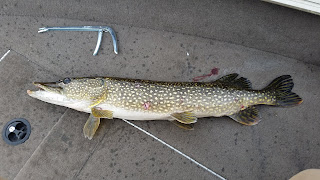 I broke in my new Sage Pike Fly Rod.  Sage says is a 10wt.  What a fantastic fly rod!  One word, it is smooth.  The 50 feet to 70 feet is it's bread and butter range.  But it was easy to punch out 30 yards when needed.  False cast are kept to a minimum, loads quickly with a false cast, water load, then out it goes 20 yards.  The was the first day throwing a big stick this year, about 4 hours, and my arm feels a little tight.  I was expecting to get home and wrap some ice, nope!

Okay, what flies did I use.  I tied a few quick ties using Mangums Dragon Tails.  These things looks really good in the water.  Not the most durable things on the planet.  See the photos.  I think I can write off the durability with the quality of fish I caught! 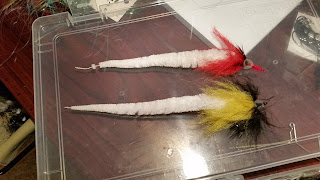 Check out this pike's nasty bite mark.  I want to catch the fish that made that bite.  I'm guessing it was a good sized musky. 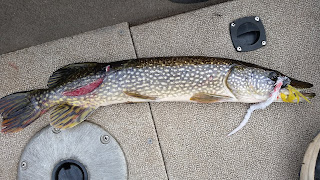 Tight lines for the rest of the season.